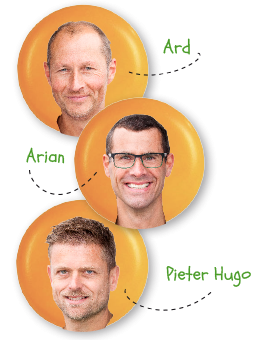 The Biostee company resulted from the merger of three individual arable farms run by Ard van Gaalen, Arian de Jong and Pieter Hugo Visser. We met at the end of 1999 during a talk about organic agriculture and discovered that we were all ready for a new challenge. A few months later, the three of us decided to not only switch to organic farming, but also to work extensively together. Our aim was to optimally benefit from the scale advantages.

We realised that mechanisation was the way forward and that one joint crop rotation would be highly efficient. By combining several smaller plots of land into larger units of 20 hectares for example, we could deliver larger volumes at a constant quality.

From 2003, once we had passed the transition years, our company became increasingly well known among purchasers from processing companies and exporters. In 2004, Biostee entered a partnership with the Tak family (Doelwijck) in Nieuw-Beijerland. Under the name Bio aan Huis, they organise home deliveries of organic products. Since 2011, we have been in a partnership with the Dam family. We also work with care farm the Mekkerstee to make our cheeses.

In 2005, the first international clients came along. Today we deliver to various wholesalers, supermarkets, webshops and processors at home and abroad.

Introducing our
cheese and vegetables

Our Jonge Blom ripens between 8 and 12 weeks. By using whole organic milk, we have been able to make a creamy young cheese.

Our Pittige Tante ripens between 18 and 24 weeks. This results in a delicious mature organic cheese. Piquant in flavour but not too sharp.

Our Ouwe Knar is a mature cheese which ripens for over 12 months. Robust and strong in flavour but still refined. Cheese with experience.

Gentlemen farmers used to have a rich and luxurious life. Those might have been the farmers we were thinking about when we developed the truffle cheese. A creamy, strong exclusive cheese with plenty of truffle.

A wonderful cheese with ingredients straight from an organic vegetable garden. Fresh parsley, piquant onion and paprika create a fabulous flavour. Cheese with a strong bite.

The Eeuwige vrijgezel is a cheese with a lot of garlic and a touch of basil. These ingredients give the cheese a surprisingly robust flavour. But with an aroma, of course!

We grow brown and red onions. From July, these are delivered straight from the soil and until May from our box store. The onions can be packed on request.

We mainly grow consumer potatoes which we keep in our box store.

We only grow B-carrots. These are carrots weighing between 50 and 250 grams each.

Our products comply with the EU rules for organic farming. This quality mark indicates that our products consist of at least 95% real organic ingredients. That you know exactly where the ingredients come from, that we do not use chemical pesticides and no fertilizers have been used.